Because I have a flash game portal at http://www.flashbynight.com/, a lot of people send me games hoping that I will put them up on my site. Although I only feature my own games (made with blood, sweat and tears) on flashbynight, I thought I might post links to games of interest here.

Here's one I received the other day. (Click the image to play the game.) It's called Balloon Headed Boy.

I'm a real sucker for platform games and, after an overly long intro, this one looks pretty slick. The movement and interaction has a nice feel to it. It's not without its issues, but if you're looking for a platform gaming time waster, this could be it.
Posted by ED at 12:15 AM No comments:

I just finished playing Medal of Honor: Airborne on the 360. It's a bit of an older game (in gaming terms), but it's one I always wanted to play but never got around to. I got it from the bargain bin.

The two previous MOH games I tried were top notch and Airborne was excellent, too. The developers put a lot of work into the enemy AI and it showed. It's not the kind of game where you can run through blasting at things. Do that and you'll get your head blown off in a matter of seconds. You have to take your time, strategize and work with the rest of the team.

The standout level was the last one: Der Flakturm. See the pictures below; the one on the top is the real Der Flakturm (flak tower) and the one on the bottom is the game version. Cool, huh? It's a massive tower that you have to fight your way through and it's filled with elite troops at every turn. You can start the battle at the top, bottom or middle of the tower, since you drop in by parachute.

MOH: Airborne is highly recommended for hardcore WWII action, especially if you see it sitting in the bargain bin, like me. 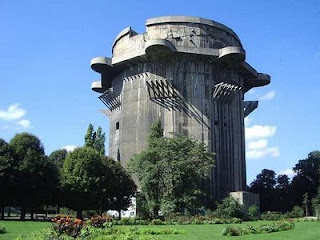 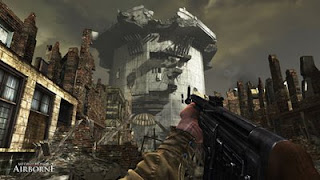