Pac Man For The Win is Ready 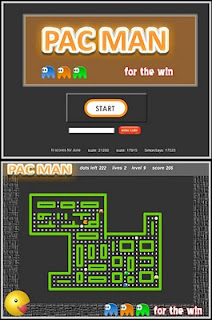 Pac Man for the win is ready and hopefully bug-free. Hope you enjoy playing it!

URL: http://www.flashbynight.com/pacmanftw
Posted by ED at 4:15 AM No comments: 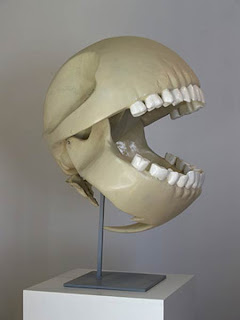 Since PacMan is thirty years old this year, I thought I might just do a homage and give pacman the old flashbynight treatment. By which I mean I take the game and mess around with the mechanics and the gameplay until I reckon I’ve come up with something different.

I’m calling my game, Pac Man For The Win because I used to really suck at the stand-up arcade version and I wanted to make something more casual. My idea is to come up with totally different mazes for each level and also to have different numbers of ghosts and powerpills and so on.

The first step was to build the ‘engine’ – basically a class which would recognize when pacman encounters blocks, dots, powerpills and ghosts. I could reuse some of this code to control the ghosts. After that, I was free to concentrate on level design, which is where I am now. I’ve designed 12 out of twenty levels and you can play the first three here:

I’ll update the page and eventually the finished game will appear there, sometime around the latter part of June.

Another thing I did was to look closely at the AI of the ghosts in the original game. I always thought that they pressured pacman too much and made it a difficult game. However, the original designer claimed that he made the AI such that the ghosts would not chase pacman 100% of the time. I got this from a great article on ‘Ghost Psychology’ here: www.webpacman.com/ghosts.html


My ghosts have three modes:

For most of the game, the ghosts are in random mode. Every so often, one or more will go into pursuit mode for a short time. If the player completes all 20 levels, he can replay them with all ghosts constantly in pursuit mode. (Without this feature, I couldn’t have a high score feature, because everyone who finished the game would have a similar score).

When pacman eats a powerpill, all ghosts go into scatter mode, but only for a few seconds (or else they end up bunched against the walls).

So as you can see, I had a lot of fun creating PacMan For The Win and I hope everyone has a fun time playing it.

Don’t forget to try my other reworked retro games:

Retris
Nanopedes
Spack Invaders
Posted by ED at 12:12 AM No comments:

A document class in AS3 allows you to keep all your code in an external .as file instead of the main .fla movie.

This tutorial is suitable for beginners to AS3 - you'll need to know how to create a document class before you can go on to do anything else, really.
Posted by ED at 1:10 AM No comments: