I've just finished Final Fantasy 13 - the first FF I've played - and I want to share some thoughts on the game.

I just love Lightning's character. She's tough and she's cool, like a female Clint Eastwood. Sometimes morally ambiguous ("a target's a target"), she does soften somewhat throughout the game. A soldier by profession, a loner by nature, Lightning turns her back on the army to go on a one-woman suicide mission to save her sister. Somewhat reluctantly, she picks up an entourage along the way.

Game designers, please give us more characters like Lightning.

Like many Japanese games, the storyline is hard to follow at times and too confusing to summarize here. The underlying theme, though, is clear: The Government lies to the people and abuses them; most people swallow the lies, but a few enlightened anti-authority types refuse to toe the line. Another theme is the Government's use of an invented 'enemy' to control the masses through fear, as espoused by Neo-con favorite Leo Strauss (http://en.wikipedia.org/wiki/Leo_Strauss).

Just take a look at our fine anarchist heroes:

I put 70 hours in to beat the game. While many Western games are this long, it is unusual to find a Western game with this quality graphics and artwork of that length (the game takes 3 discs on the 360). Western-made games with the best quality graphics are often less than 10 hours to play through. How the Japanese manage it, I don't know.

Have a look at this eye-candy:

Chobo: Trapped in a Tetris Game

So I had this premise for a game where the character is trapped inside a round of Tetris, and I made this into a Flash game.

Okay, well the game is similar to Tetris. I had to play around with the mechanics to get it to work nicely and I threw in a few enemies and power-ups.

I invite you to play the result: 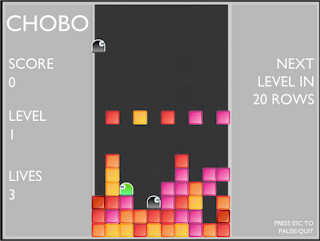