Although I love Flash, I decided to dabble in HTML5 to see how easy or difficult it is to produce games in it.

I dug up this tutorial, which is excellent, and produces a 'BreakOut' game using HTML5, the coding in javascript, of course:

The end product of the tutorial is a simple playable game. However, you have to jump through a lot of hoops to get there. This means that HTML5 for this kind of game is fine for the end user, but harsh on the programmer.

It also seems that HTML5 could be applied to simple games, like this one, but it would be a real pain to program a more advanced game in it. This is where Flash shines.

Flash, of course, is not available in-browser on the iPad, whereas HTML5 is. Android supports HTML5 too.

So I'm going to experiment and convert Drench (flashbynight.com/drench) to an HTML5 game and see how it goes.

I don't like HTML5 at the moment, and I'm experimenting with it grudgingly... but people say it will improve over time.
Posted by ED at 7:29 PM 1 comment:

Like the original Retris game (flashbynight.com/retris), Retris 2 takes the concept of Tetris and expands on it by featuring new types of blocks and bonuses. Retris is popular, but I wrote it when my programming skills were not so honed and I've always wanted to make improvements to it - I thought it would be good to make a sequel.

1 The 'awkward' blocks - unusually and tricky shaped blocks
2 The 'eraser' block which destroys blocks of a similar colour
3 The back-and-forth block, which moves back and forth along the top of the screen until you press the down arrow.
4 The 'singles'  a column of single blocks that drop one after the other
5 Horizontal single blocks
6 The 'uber-line' - a full line of blocks that fall together
7 The 'lightning block' - a block that falls rapidly then slows
8 The superbonus - if you destroy this block in a line, you destroy ALL blocks beneath it and earn 1000 points. A lifeline, when you get into trouble.

In addition to this, blocks grouped in a rectangle of six of the same colour, will be destroyed.

Retris 2 will be in 'Beta Testing' mode until the end of November. This means that I may still be making changes to the game during this time. I'll also be taking suggestions for improvements. Post them here if you have any.

Here are some screenshots: 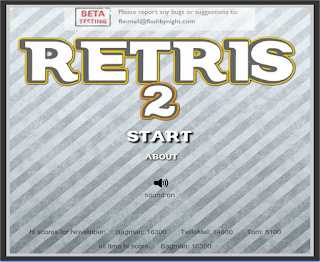 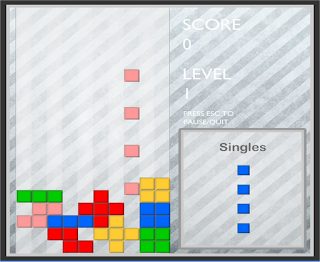 A Couple of Good Android Apps

Apps2SD moves apps off your phone's internal memory and onto the SD card, thus freeing up tons of space. Once installed, the next time you download an app, it will give you the choice to install it on the phone or on the SD card

I searched long and hard for a really good 'to do' list app. This great little app triples as a to-do list, shopping list and pantry list. This is the nicest one I found and it's great for trips to the supermarket.
Posted by ED at 6:41 AM No comments: