Okay, so it's time to post the first of what I hope will be many game design tutorials. I thought I would start with the game loop, which is a basic building block of just about every game.

Rather than post the tutorial here, I've just put it up on my site along with the fla file.

I have finished my 'reinterpretation' of Centipede and you can play it at www.flashbynight.com/nanopedes

I estimated that it would take about ten hours to finish; well, it took a little bit longer but not too much. I'm happy with the finished product. The controls are smooth and the gameplay is nice. I'll get some feedback from players and decide if any more tweaking is in order.

A few posts ago, I mentioned I would post some code, but I decided against it in the end since I coded this in AS2 and I think everyone has switched to AS3 by now. Me, too. Starting from now, all my projects will be in AS3 and I promise to post some code and hopefully some tutes, too.

Here are some pics of the game: 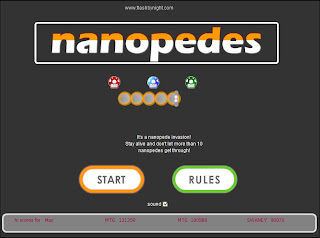 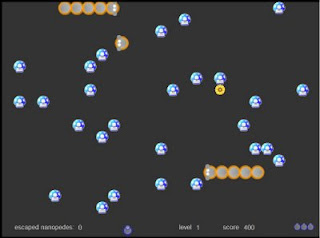 My latest obsession on the Xbox360 is Fallout 3.

Set in the post-apocalyptic surroundings of Washington DC, you play a character who has only recently escaped the underground vault or fallout shelter that you grew up in to brave the perils of the wastelands for the first time.

An RPG with a compelling story and lots of tongue-in-cheek humor, Fallout 3 is a blast of a game. The gameworld is huge and I reckon a full playthrough without exploring everything would take 80 - 100 hours. In other words, know what you're getting yourself into before you start on this game.

The combat in Fallout 3 is a kind of real-time turn-based system called VATS that allows you to target parts of the opponent's body and uses 'action points' as a means of controlling the turns. It's a bit hard to explain here, but it's a lot of fun and it doesn't become tedious (compared to the combat in Fable 2, for example).

I, personally, was a big fan of Fallout 2 and surprisingly Fallout 3 is very similar to Fallout 2 in many ways. If you played the previous game and liked it, it's a sure bet you'll like the new version.

I found the time to do a bit more work on my Nanopedes game. The latest working version is at: www.flashbynight.com/nanopedes/nanopedes1.5.swf

What I have done since the last time is:

1 Add an instructions page
2 The player can die and has three lives
3 Add a scoring system
4 Add a mechanism to control the level - how many nanopedes, what type and what speed
5 Add a feature that when the head is shot, the next section regenerates as a head - this was a tricky bit

The next things to do will be

At the moment, when you lose all three lives, you go to a page that says Game Stats. Game Psychology 101 states that it is not good to end a game players experience with failure - the classic 'you lose' screen. So I hope by adding a game stats page, I can shift the focus to what the player has achieved in the game rather than the failure of having been killed. A bit touchy-feely, I know, but this stuff is important.

I've started on a new game for Flashbynight.com, which I'll call Nanopedes. It's based on the classic centipede game, but with a twist, of course.

The first thing that I did was to see what other Flash adaptations of Centipede are out there and surprisingly there's not much. A quick 'digg' turned up this version which is faithful to the original, but seems to be too fast and why is the screen size so small?

My idea was to have smoother motion, vector graphics and a 'lazy' kind of gameplay that casual gamers like. I thought I would call it 'nanopedes' and instead of one big centipede, I could have lots of small ones on the screen at the same time. Then I could play around and have different types of nanopedes in different colors with slightly different behaviors. When you level up, you meet different 'pedes and the speed increases. Sounds like fun and not too difficult to do. I estimate it will take me about ten hours to complete.

So far, I have designed the 'hero' (but I think it needs redesigned), the basic nanopede and the mushrooms I got from a vector pack. I have done the movement of the hero (unfinished), added the ability to shoot 'lazy' bullets, the ability of the bullets to hit the mushrooms and hit the nanopede. I have put in the basic AI of the nanopede (unfinished), and I have designed a basic logo and into page.

So far, I think it's looking good. It has a nice feel to it and I'm happy with the speed and the playability. The only difficult bit is the movement of the nanopede around the mushrooms and the basics of that is done. And would you believe that it weighs in less than 7K?

I want to add some tutes to this blog, so I'll be posting snippets of code later. But that will have to wait for another day, since it's almost lunchtime!
Posted by ED at 8:50 PM No comments: