I'm working on a new retro space game called 'Spack Invaders'. Hope to post an advanced prototype within a day or two.
Posted by ED at 6:41 PM No comments: 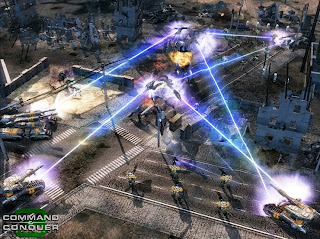 I'm playing the second of my bargain basement games: Command and Conquer 3 for the 360.

People told me that it wouldn't be fun to play a RTS game with a controller and I had my doubts. It is tough, but doable. Like everything else, you get used to it.

As for the game itself, I breezed through the levels on Medium difficulty until I got to Croatia. Croatia killed me. I'm always worst at the defend-against-the-onslaught missions and this one has a double whammy. You're told to hold out for two minutes until reinforcements arrive, but when they arrive, you have to actually go and rescue them on the other side of the city. You can't build any more buildings until you do.

I got creamed a few times, so I'm taking a breather and I'll try again tonight.

Tiberium wars, ladies and gentlmen.
Posted by ED at 6:34 PM No comments: 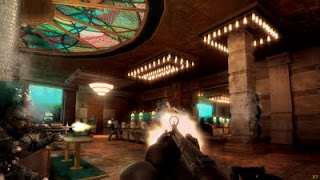 After finishing Batman: Arkham Asylum on the 360, I picked up a 'bargain bin' game called Rainbow Six Las Vegas.

It took me a while to get into it, but once you get going, this is a good game. The graphics show the game's age, but the gameplay is tight. You command a three man squad and you have to get your tactics right to defeat terrorists who have taken over several casinos in Las Vegas.

The fun part of the game is setting up assaults using your team. You can storm a room using a variety of explosive devices and you can outflank enemies on two sides using your squad. Like Gears of War, there is a run-and-cover system that gives you time to plot your next assault.

The main weak point in the game is that the checkpoints are spaced far apart. It should autosave after a major battle, but it doesn't, which is annoying but also gives you more to play for.

This was big release back in the day. If you can spot it in the bargain bin like I did, pick it up - you won't regret it.
Posted by ED at 4:23 AM No comments:

Like Escapoids, it's based on the Drench game model (which got good reviews). You guide the hero around the maze, this time turning blocks orange as you go along.

It's an original idea for a game. Will people like it? Let's see.

The game can be played at www.flashbynight.com/agentorange
Posted by ED at 4:18 AM 1 comment: